Twelve-year-old September is determined to choose an adventurous name from the Name Bank – not like all her friends, who are named after flowers or trees. But she soon discovers she has no choice, unless she can win an ancient and mysterious board game. And every roll of the dice leads her further into danger.

This was not a book that wrote itself. Sometimes, it felt to me as though my editor and I were chiselling the story, chip by chip, out of a stone block until it finally began to resemble a real book. But it was definitely worth it and I would do it all over again. All I need is another idea ...

Many things can influence you when you are writing a story or novel, some are more conscious than others. For instance it was clear to me early on that the Name at the End of the Ladder was partly inspired by one of my favourite books as a young child – Lewis Carroll’s, Through the Looking Glass. I loved the idea of Alice stepping into a mirror world which had the opposite rules to our world and of her being one of the players in a chess game.

At some stage during the second rewrite of The Name at the End of the Ladder I realised I needed to sort out what the rules were behind the magic in the story. Right from the start I knew there would be magic in the names, but how did the sinister magic of the Names and Ladders board game fit in?

It was also during rewriting that the underlying theme of control versus individuality began to emerge. Growing up, I remember feeling how unfair it was how little say, as a child, you had over day to day things in your life.

At the beginning of a project, writing can be quite solitary, but as it draws nearer and nearer to publication a whole team of people are working together to make it work. I think I like that bit the best. As the publication day for The Name at the End of the Ladder drew nearer and nearer, my editor, Nicola Robinson, kept pushing me to make the story even better. If there hadn’t been a deadline we’d probably still be going. And I am over the moon with the cover the talented Amy Daoud designed for the book, and with the title that my writer daughter, Anna, came up with – it’s so much better than any of my attempts.

This engaging debut novel is set in a world where everyone has to choose their real name when they turn twelve ... read more
Mia Macrossan, Reading Time

For fans of Jumanji, this book will pull you in. read more
Amy, Boffins Bookshop

An innovative, exciting novel set in a time where people’s lives are so controlled they can’t even choose their own name … It’s an exhilarating fantasy novel that draws the reader on at a fast pace. read more
Jean Bennett, Bookrapt

Highly recommended for readers from 9-12 years ... This novel is refreshingly original, introducing a new universe, where friends must work together to fight against evil forces. read more
Rhyllis Bignell, Readplus

I’m so glad I stumbled across this book and decided, despite being pretty broke, to buy it on a whim. I started it last night and finished it this evening and was completely drawn in to the world De Roo has created ... read more
Bruce Gargoyle’s Review Blog

...Told with just the right amount of excitement and frissons of fear, this is a book readers looking for a real adventure story with overtones of fantasy will appreciate... read more
Babara Murison, Around the Bookshops 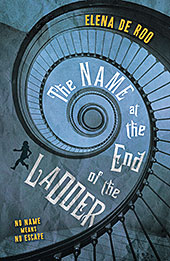 The Name at the End of the Ladder is available as an ebook from the following online etailers (ebook sellers):
Amazon
iTunes/iBooks
Kobo
JBHiFiNow ebooks
Bookworld